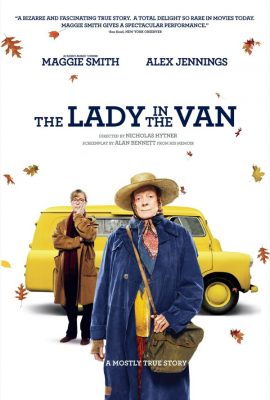 Led by a marvellous performance from Maggie Smith, she stars as Margaret Shepherd, a homeless woman who parked her van in the drive of Bennett’s Camden townhouse. In the film, we see, in part, how she got there: while working as an ambulance driver in the war, Miss Shepherd was involved in a fatal crash with a motorcyclist and chose to evade the police. Stricken with guilt, traumatised by early run-ins with difficult nuns, she becomes a belligerent recluse who sleeps, reads – and defecates – in her VW.

Bennett’s reluctant sense of compassion, his experience with Margaret – and his sneaking suspicion Miss Shepherd may turn out to be good copy – leads him to take pity and allow her to temporarily use his drive. She stays for 15 years.
Acclaimed by the critics. This is a film that will warm the cockles of your heart.